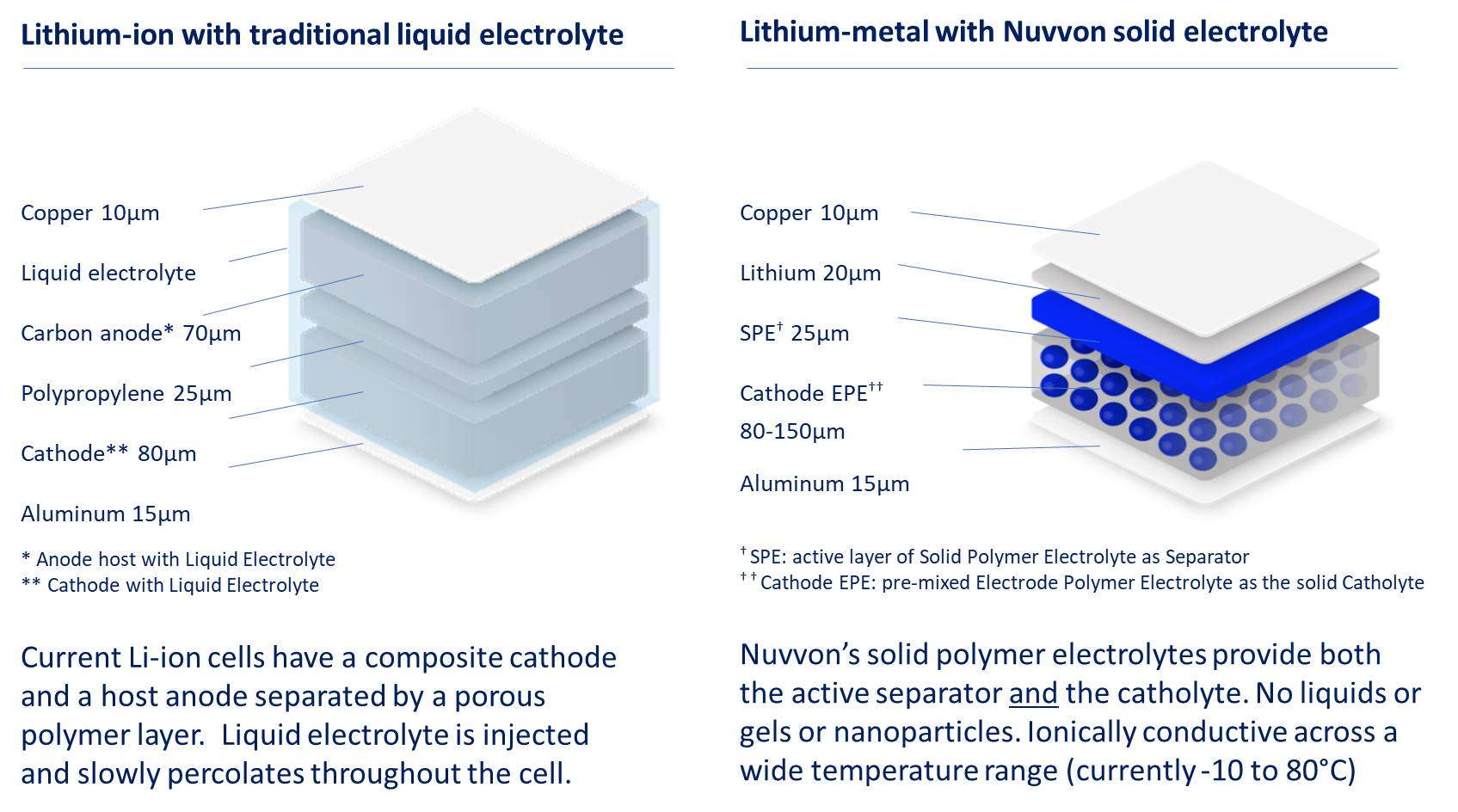 As an overview, this post cannot cover every possibility or explain in depth. Nonetheless these 10 topics give a reasonable overview of solid-state batteries in terms of what is less transparent in the publicity and hype of solid state. To be clear, we need solid state batteries, but we need to put claims in context and be wary of missing information.

1. Safety – surely the most important factor

Let’s start at the beginning with the original and, one would hope, still the primary reason for solid state. This is safety, which is directly linked to the temperature limitations of liquid electrolyte. We all know about thermal runaway in current Li-ion batteries: fires which are rare but unstoppable. A chain reaction starts when a cell is unable to discharge heat at the rate it is being generated. Current Li-ion batteries are kept at a safe temperature with a cooling system and BMS so that they operate in a sweet spot, which is around 25-45°C.

It generally requires a fault, defect, misuse or accident to overheat a cell. Unfortunately, with billions of cells in millions of EVs and storage systems, such problems are statistically inevitable. So, let’s not pretend we can design out the risk, we must remove the source. Liquids are further discussed below (#3) as is lithium compatibility (#5) and new risks such hydrogen sulfide (#8).

Summary: safety remains the priority, so we need to keep talking about it.

It seems to be assumed that solid electrolytes need a pressure system. Renowned scientists say that solid state is solved in the lab and now it’s over to the engineers to devise a pressure system. Indeed, it has been shown that lithium metal deposition can be enhanced with pressure. But while some pressure can be easily integrated (e.g. a vacuum on the sealed pouch), the high pressures required for many solid-state batteries remain unrealistic for practical applications. High pressure is required to overcome interfacial resistance, particularly for ceramics and sulfides. Some solid polymers do not need pressure, but perhaps surprisingly, hybrid and semi-solid cells need high pressure. If high pressure is required, the problem is compounded by volume changes as the cell charges and discharges and as it heats and cools. This complicated problem lacks transparency because a pressure system adds significant expense and mass. It is inappropriate to cite improved energy densities without acknowledging the additional pressure system. Some kudos to QuantumScape who recently presented energy density figures stating “without packaging”. A little cryptic perhaps but suggesting more is required for the cell to operate.

To recap: operating pressure is often omitted from performance claims yet has a significant impact on energy density, cost and scalability. (See next topic for scalability).

3. Liquids – does solid have to mean solid?

This topic is critical because liquids cause problems for Safety and Pressure (#1 & #2 above) and Temperature Range (#4 below). Many products are called solid state because the separator is solid electrolyte. The inactive porous polymer separator is replaced with an active solid electrolyte that is both mechanically strong and ionically conductive. It keeps the electrodes apart, resists dendrites (see topic #5) and transports lithium ions. But what about the catholyte? The cathode also needs electrolyte (except for very thin film cathodes) and the anode needs electrolyte if not using lithium metal. If this electrolyte is liquid or gel then we need to assess safety risk and performance issues. The risk of liquid electrolyte is explained in topic #1. Topic # 4 explains how liquids limit temperature range and reduce cycle life. But also, liquids limit scalability if high pressure is required. Pouch cells can easily integrate 1 atm pressure by sealing under vacuum; but adding high pressure uniformly across a cell is problematic if there is liquid that can move around. This is a barrier to scale which cannot be easily solved with solid electrolytes. During processing ceramics require sintering and sulfides require massive pressure (500 bar), which can work for a separator but not for a catholyte. In contrast, solid polymers can work as both separator and catholyte
but only if the ionic conductivity is comparable to traditional liquid electrolytes.

A solid-state battery should offer higher temperature capability compared to liquid electrolyte cells, meaning without a cooling system. Liquid electrolytes become unstable above 40°C and also accelerate cathode degradation. If semi-solid or hybrid cells require a cooling system this impacts energy density and cost. A simple check is whether test data extends to the 40 to 80°C range. 80°C is a useful benchmark because it is above surface temperatures on the hottest of days. This means EVs can park in the sunshine without cooling systems that drain the batteries! Double check the data, sometimes high temperature claims for the separator electrolyte do not include the whole cell. Some solid polymer electrolytes have the opposite problem, having to be heated before they are ionically conductive, typically to 50-80°C. This also adds cost, reduces system energy density and is impractical for general use.

In summary: SSB cells should work across a wide temperature range without external systems, otherwise the systems should be acknowledged in the energy density and cost claims.

To improve energy density the electrolyte needs to be stable with lithium metal and high energy cathodes or there will be little energy density improvement. Various SSB players have targeted lithium metal then pivoted to graphite or silicon. This suggests incompatibility with lithium metal, although there is one player stating that lithium is unsafe, which could also be read as meaning incompatible with their solid electrolyte. Another unresolvable debate is who has the best solution to dendrites. Ceramics and Sulfides are hard but have grain boundaries and can be brittle. Polymers are accused of being too soft but some players disagree. Cycle life and millions of tests will tell but, as above, faults are statistically inevitable so the debate shifts back to removing the possibility of thermal runaway.

High energy density requires a thin separators equivalent to current Li-ion cells, anodes that
are thinner than current Li-ion, and cathodes that are at least as thick as current Li-ion. To use real numbers: separator in the range 20-30µm, thin lithium less than 40µm, and cathode at least 80µm. Why? If not, simple math will show that cells are not achieving higher energy densities. There are novel 3D players that would disagree, but they also need to respond to the scalability and processability points (see topic #10). The reasons layer thicknesses are not mentioned include thin ceramic separators are very brittle, lithium cycle life is difficult to extend as the thickness is reduced, and penetrating thick cathodes with solid electrolyte is difficult and often requires liquids.

For many developers and OEMs long life and fast charge is the first topic, and therefore gets a lot of air time simply because it promises longer range and shorter stops for EVs. It is what everyone wants to hear so it becomes the publicity goal. Long cycle life and high C-rate can be achieved, but generally at the expense of each other, which is not so often explained. As above, the layer thicknesses or pressure requirements may not be stated. Most readers are becoming to understand that long cycle life is usually achieved at low C-rate, and high C-rate is usually at the expense of cycle life. Sometimes the small print qualifies long life with high C-rate at 1-in-10 or 1-in-30 cycles, with the other cycles at low C-rate. Solid state should, eventually, delivery genuinely long life with fast charge. One reason is being able to perform stably at higher temperatures so therefore accommodating faster power transfer, but this requires a highly stable solid electrolyte throughout the cell. Another reason is that charging is limited by the rate of intercalation into hosted anodes, which is eliminated when using lithium metal.

Summary: impressive cycle life and C-rates are keenly publicised but is often opaque and further distracts from the non-achievement of real-world fundamentals.

The first objective was improved safety, but some ‘solutions’ reduce one risk then add another. Remembering that faults and accidents are inevitable, we need to check whether the fault mode is “fail safe”. Adding huge pressure is contained energy that can release unexpectedly. Using some liquid electrolyte retains thermal runaway risk. At least one player states that the use of lithium metal us dangerous however the use of ultra-thin lithium mitigates this. Using sulfides brings a new risk of hydrogen sulfide due to moisture sensitivity.

Summary: the key to reducing risk is to have a highly stable solid electrolyte throughout a cell that operates across a wide temperature range.

Packaging was touched upon regarding pressure (topic #2) and needs further analysis, being one of the least transparent issues. The great pictures of huge show batteries have one thing in common – they never show the real-world operating system required for pressure, cooling, heating or containing risks like hydrogen sulfide. Alternatively, there are animations showing some clear advantage but not the whole story. Or there are some amazingly life like pictures that do not mention they are renderings.

Things about Solid State Packaging that you are often not told

Packaging is critical because it links to many of the other 9 points in the things you need to know about SSBs. The pressure system remains the biggest unknown. It is rarely talked about, and it has not been proven at scale. High pressures are required by most SSBs to overcome interfacial resistance. This problem is exasperated by the need to accommodate volume changes and further complicated for semi-solid / hybrid cells because liquid can disperse unevenly under pressure.

Every start-up is obliged to say “our technology is easily scalable”. Without numbers and timelines it is a somewhat empty statement. Some players have developed SSB tech for the micro wearables market, then imply scalability for the EV and Renewables markets. Most micro SSBs are ceramic but that will not easily scale. Novel architecture and processes such as 3D or printing should not be mentioned in the same context as giga-scale Li-ion which has taken decades to develop. SSBs need to reduce cost to make EVs and renewables economical. Using new processes will not reduce cost without a decade of development. Adding external systems does not reduce cost. Ceramics require sintering. Sulfides require massive pressure in production. Hybrids require “special protective coatings” to reduce risk. All these add cost. The goal is to reduce cost. Processing should be a standard R2R process. It is widely accepted that solid polymer electrolytes are the simplest to produce and most easily retrofitted to existing processes and cell architecture.

Solid State technology has made great strides and will eventually provide improved safety and higher performance at lower cost. But SSB players need to openly address the issues discussed above to bring a viable product to the real world. Reduced risk, no external pressure system, higher energy density and existing R2R production to produce commercial scale cells. Whilst there remains much to do and, of course, I am biased, I think Nuvvon offers the only SSB so far that can do all of this.

A review of the Solid State Cell Companies and their technology by Dr. Simon Madgwick, Chief Executive Officer, Nuvvon Inc.