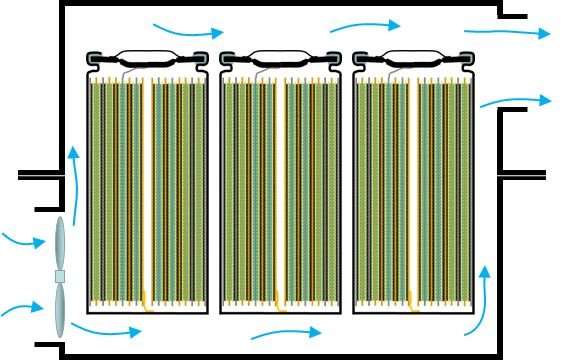 There are many battery cooling options, which is better or best depends on the cell selection and application. There is no right and wrong. However, let’s look at them and at a first attempt list of advantages and disadvantages.

Note: all of the images show a section through cylindrical cells, but each of these cooling methods are application to all cell formats.

The cell or cells are held in an enclosure, this enclosure could have dual functions (eg mobile phone). Heat generated by the cell is conducted, convection or radiated to the enclosure and vice versa.

Typically used for low power applications and where the ambient conditions are below 35°C.

The cell or cells are held in an enclosure, a fan is used to move air around the enclosure and hence help to create a more even temperature profile across all cells.

Heat generated by the cell is conducted, convection or radiated to the enclosure and vice versa.

Typically used for low power applications and where the ambient conditions are below 35°C.

The cell or cells are held in an enclosure, air is forced through the battery pack and cools the cells. This approach can use waste cabin air that will have been filtered and cooled.

An encapsulated cooling fluid that is circulated to the battery where heat is transfered to and from the fluid. Heat is removed and added to this fluid away from the battery pack using a radiator and/or heat exchanger.

Probably the most common battery cooling system used in electrified vehicles as the system can use water-glycol as the cooling fluid.

The cells are immersed in a dielectric and the dielectric then flows through a heat exchanger to extract the heat. The dielectric is in direct contact with the cells and busbars and hence thermal barriers are minimised.

A solid to liquid phase change material is packaged next to the cells. This temperature at which the material changes phase is normally set around 50 to 70°C so that it can essentially add thermal inertia to overheating cells.

Examples: ? (don’t know of any examples in production – please comment below)

The cells are thermally connected to a refrigerant cooling plate. This is seen as less complex in the automotive industry as it removes the intermediate water-glycol system and applies the refrigerant system directly to the cells. Thus removing a number of parts, making it possibly cheaper and lighter.

We are sure this is not all of the cooling system options and we would really like to know what we missed, leave a comment below or email us at nigel@batterydesign.net

Heat generation in a cell can be defined quite simple for the case where the cell is operating within it’s normal limits. The first expression gives the heat flow [W].

The first part of this equation is the irreversible Joule heating term, the I2R term.

The second part is the reversible entropy term or Reaction heat terms. The charge and discharge reaction can be exothermic or endothermic under certain conditions.