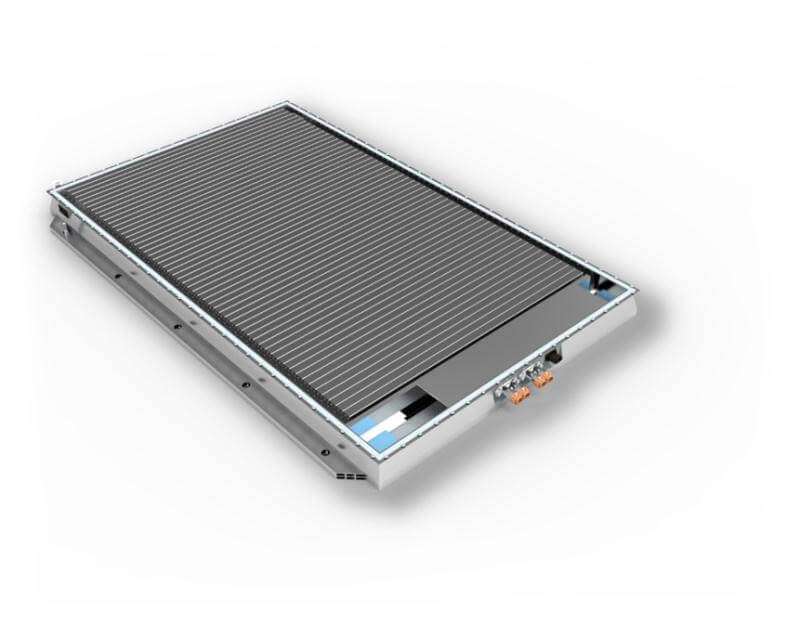 The BYD Blade pack design is the first cell to pack design that encompasses everything this means. Not having a module and the overhead of a module is difficult to achieve. LFP cells make this design easier in some ways and this gives a new lease of life for LFP chemistry. The Tesla with CATL’s LFP cells achieve 126Wh/kg at pack level compared to this Blade pack that achieves 150Wh/kg. A significant improvement, but this is quite a way behind the 82kWh Tesla Model 3 that uses an NCA chemistry and achieves 171Wh/kg at pack level.

The key to this Blade design are the very long cells that stretch across the width of the automotive pack.

The image shows the top panel removed and the faint lines show the ~100 to 120 cells running across the pack.

BYD are able to make cells to a range of dimensions. The following set of specifications gives an example set of numbers that are consistent for this particular cell:

Most vehicles have some form of tunnel section as it works structurally with the front longitudinals and bulkhead. Hence it makes sense to lift the control system into this volume.

This busbar would be electrically isolated and positioned above the cooling plate.

The cooling plate is a single large plate that is fixed to the top surface of the cells. The coolant connections are both at the front of the plate. This approach has a number of advantages:

However, this does also have some significant challenges:

BYD reports no fire or explosion from the following tests:

The CATL Qilin CTP 3.0 is their second generation cell to pack design. Qilin is named after a legendary creature from China.

The latest CATL post suggests that this integrated system can increase the energy density to 255Wh/kg for ternary battery systems (NMC, NMCX etc), and 160Wh/kg for LFP battery systems. Essentially removing the overheads of a module.