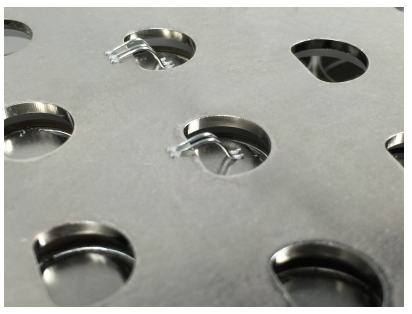 When we connect cells in parallel to increase the capacity we might also want cell level fusing. This fusing being by definition designed to disconnect a cell that for some reason is sinking or delivering high currents.

The fusing can be inside the cell and sealed or external to the cell, sometimes both internal and external fuses are used.

Connecting cells in parallel is quite a simple concept, then we look at the complexity around ensuring the parallel group behave the same.

If one cell is disconnected from a parallel group of cells the remaining cells then have to accept and deliver a larger share of current. This also means the overall energy capacity of the pack will be reduced along with reduced charge and discharge power.

In a cylindrical cell there is normally two layers of fuse, the CID and a ribbon connection between the jelly roll anode and cathode to the -ve and +ve terminals respectively. The ribbon connection is quite thin and hence will break at a given current.

It should be noted that the CID is technically not what we would know as a fuse as it works based on a pressure inside the cell. A high pressure will cause the CID disc to lift and break, disconnecting the positive terminal from the jelly roll. This means a high instantaneous current will not instantly cause the CID to operate.

The NASA technical bulletin [3] concludes the PTC and CID protections were effective for single cell overcharge and external short-circuit conditions. However, the PTC and CID devices failed to protect the cells when installed in certain series and parallel arrangements. The paper also concluded that certain series and parallel arrangements resulted in a thermal runaway condition and cell rupture.

Most cylindrical cells now only have a CID, the PTC having been removed because of the increased internal resistance. However, I have not seen data for external short circuit cluster testing of multiple cells in series and parallel with just a CID in the cells.

Jung et al [2] look at external short circuits and the operation of the cell internal fuses and module level fuses. Noting that there are a number of factors affecting the operation of the fuses. The conclusion from this paper is that “the module fuse operates over 120 times faster than the cell fuse based on the same SOC conditions, and the quantity of electric charge in the module fuse is over 110 times smaller than in the cell fuse in the case of a short-circuit fault”.

Wire bonding can be designed such that the thickness and length of the wire is designed to break at a given current. Thus creating an external cell fuse.

Wire bonding (ultrasonic compression bonding) is a combination of three precisely controlled parameters that form the bond: (i) Ultrasonic vibrational power; (ii) Downwards force; and, (iii) Time. The wire is pushed with a controlled force against the surface to be bonded, then the wire is vibrated (in battery production this typically happens at 60kHz for 100 milliseconds).

It should be noted that sizing this wire as a fuse is not trivial, Utkarsh Mehrotra et al [1] look at the boundary conditions of a finite length of aluminium wire and the impact of large heat sinks.

This approach is used by Tesla in their 18650 and 21700 based pack designs. The Tesla Model S P85D uses 0.28mm diameter pure aluminium wires. Tesla redesigned the cells and removed the CID and the PTC.