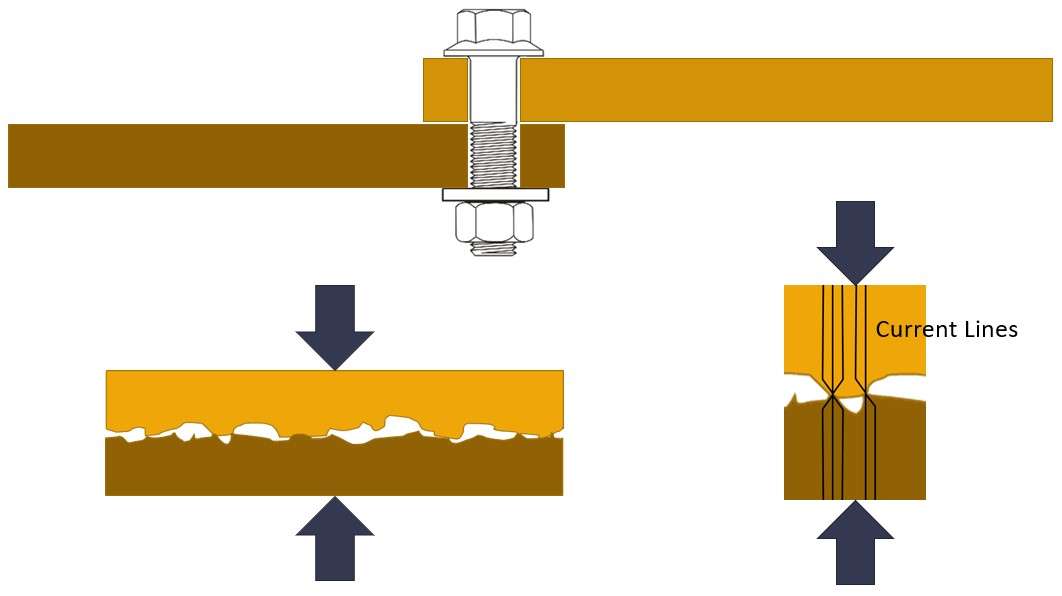 The surface structure can be further described by the surface flatness, surface oxidation and water adsorption.

These joints in a battery pack will either be welded or bolted. Initially the easiest to think about is the bolted busbar joint.

The bolt torque can be used to estimate a force and hence a contact pressure.

In reality the connecting surfaces are not perfectly flat. The surface roughness will effectively reduce the actual electrical contact area.

Thus, if two of these meta surfaces are brought together under very low pressure, isolated points on the surfaces will touch. An electrical current will encounter a higher resistance at these restricted points.

In addition to a greatly increased current density, the constriction of the lines of current flow also causes a lengthening of these lines and thus causes what is known as spreading resistance between the contacts.

If the contact surfaces are not perfectly clean, there is also an interface resistance, caused by oxides or films.

this page has been produced with the sponsorship and support of h.e.l group and TAE Power Solutions

Plating the surfaces of busbars where they connect has a number of functions:

Braunovic [3] showed that sectioning the joint improved the contact resistance. A drawing of the split joint and a table of measured values show this clearly as an improvement. In addition this table shows the impact of brushing (using a steel wire brush in one direction) the surfaces and using a joint lubricant (an oxide inhibiting grease was used – Burndy Penetrox A-13).

Greases / lubricants are widely used in the HV electrical industry. The table above shows that they can significantly reduce the resistance across an electrical joint. The main purpose of these: