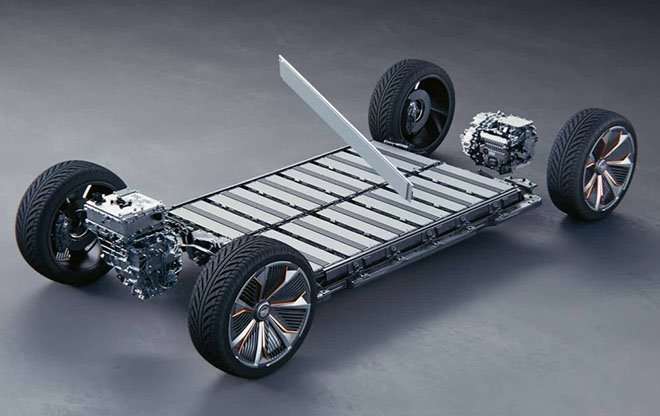 The GM Ultium is a flexible battery pack architecture destined for a number of vehicles. GM is planning on building 1 million EV’s a year by 2025 and hence has invested in a joint venture with LG Chem to produce the Ultium Cell.

At the moment the details around the cell are limited and we don’t have a specification sheet, hence these numbers are approximations:

The 100Ah cell is large enough to reduce manufacturing costs, but it does reduce flexibility in total battery pack capacity. The smallest HV pack would be 96s1p = 35.5kWh. Also, the increments in capacity would also be 35.5kWh unless your architecture is flexible in terms of the system operating voltage window.

Most vehicle designs have limited height under the front and rear occupants feet. This means it is difficult packaging a 100mm high cell along with the cooling system and structure of the module and pack. Tesla’s answer to this problem is to use a 70mm tall cylindrical cell.

GM’s approach with Ultium is to use different types of module design, creating the option to have the cells stacked vertically or horizontally.

This approach creates complexity in the module design, increasing costs in manufacturing, handling, service and end of life even. This is not a first as the 2010 Nissan Leaf packaged the modules such that some cells were vertical and some horizontal. Also, Nissan managed this with a common module design.

GM are now showing the Ultium module with both pouch and prismatic cells [4].

The aims of this pack have been described in a number of GM articles:

This is a bold set of claims. For a number of these we need to see more details.

The first application of this battery architecture strategy is in the GM Hummer EV, this is a 212kWh battery pack that weighs ~1326kg giving it a pack gravimetric energy density of 160Wh/kg. Not so great when compared to the Tesla Model 3 that achieves 171Wh/kg at pack level and with a pack that is less than half the capacity of the Hummer and hence has a larger proportional overhead.