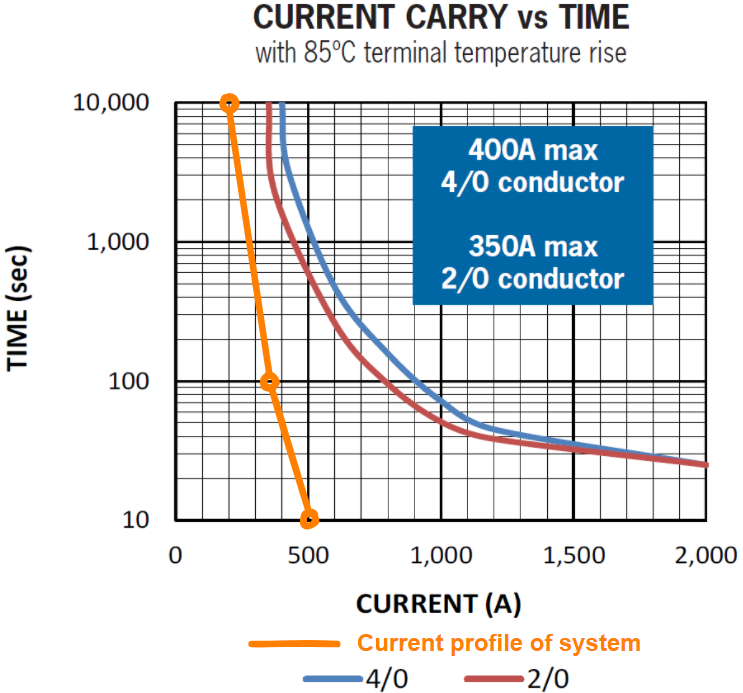 Contactor selection is an iterative process that includes consideration of system specifications as well as failure scenarios. Most of the contactor manufacturers share necessary information in datasheets. Thus, a wise approach would be making a comparison table to cover basic specifications like thermal and mechanical initially.

After pre-selection based on datasheet values, we should consider system specifications. Let’s assume that we have 430V maximum system voltage (100 NMC cells in series), and the moving average current profile for the battery as:

We can compare the load profile with the carry current profiles on the datasheet [1].

Time-Current graph shows the current profile of the system (orange) with contactor carry current capability. So, the comparison shows that the contactor can carry our systems’ normal currents.

We could also collate different current-time characteristics for comparing different contactors. This could give the opportunity to downsize and to find smallest contactor.

What about failure currents? We should also consider several failure scenarios at this stage. To find out if this contactor is also suitable for failure current handling, we can start with the worst-case failure current.

A similar calculation can be done for charge current. Short circuit events can happen also during regenerative braking and charging. However, in most cases, the worst failure event is during discharge. This is because there are intermediate elements like inverters, DC-DC converters, or external chargers with their protection circuits during charging.

If we look at the datasheet, we can see that the contactor can handle short circuit currents up to 4000A for 20ms. Therefore, this contactor option is suitable for our application.

2 thoughts on “How to select EV Contactors”