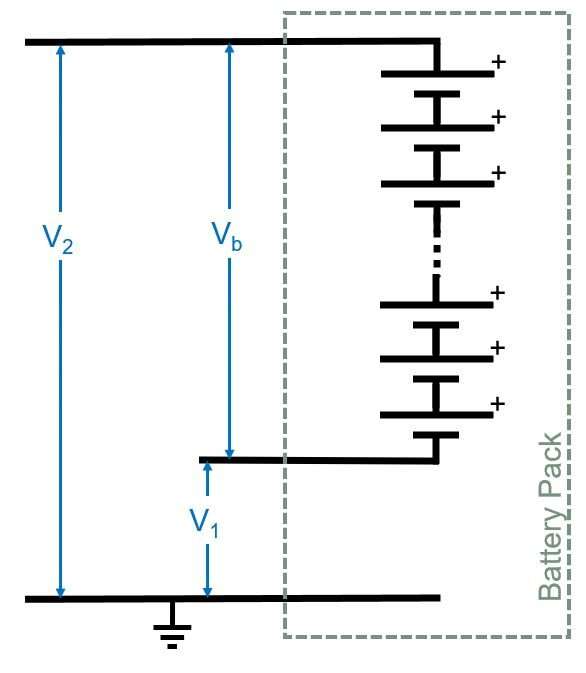 The isolation resistance of the complete HV system to ground with the contactors closed should be >500Ω/V and hence for a battery pack its resistance target must be specified by the HV System designer, typically >1,500kΩ.

The NHTSA list values for a Tesla in their Tech Note [4] :

It is important that a battery pack is designed around this criteria when new and during it’s lifetime of use. The BMS is expected to monitor the isolation resistance and act accordingly. There are a number of reasons why the isolation might reduce or breakdown over time:

It is really important to understand that 500Ω/V is a legislative requirement for the vehicle. Which means it applies to the whole HV system not just the battery – a common misunderstanding. Several things follow from this:

The conventional method for measuring isolation resistance of a battery pack is defined by ECE 324 Addendum 99 regulation No 100, Annex 4.

Note that this page shows part of this procedure as defined by ECE 324 and you should check the latest version or any other standards that might apply to your application and country of sale.

This describes two methods for measuring the isolation resistance of the system. Here we will concentrate on the method that uses the battery pack as the voltage source for the measurement.

The method specifies that the battery should be equal to or above the nominal voltage for the test and the voltmeter utilized measures voltages in DC values and has an internal resistance of greater than 10 MΩ.

Measure the operating voltage of the battery pack Vb.

Measure the voltage (V1) between the negative pole of the tested-device and the ground connection.

Measure the voltage (V2) between the positive pole of the tested-device and the ground connection.

Note: The standard known resistance R0 (in Ω) should be the value of the minimum required isolation resistance (in Ω/V) multiplied by the nominal voltage of the tested device plus/minus 20 per cent (in volts). R0 is not required to be precisely this value since the equations are valid for any R0; however, a Ro value in this range should provide good resolution for the voltage measurements.

The electrical isolation resistance (Ri) is then:

Calculate the electrical isolation (Ri) according to the following formula:

The isolation resistance as measured needs to be greater than 500Ω/V. If the battery pack nominal voltage is 360V then Ri > 180,000Ω

Note that most legislation provides options for what happens when a loss of isolation is detected. e.g. the Chinese GB/T 18384-3_2015 para 6.4 Alternative approach for protection against electric shock:

“As an alternative to 6.3, the vehicle manufacturer shall conduct an appropriate hazard analysis and establish a set of measures which give effective protection against electric shock under single-point failure conditions.”

Adrian Berry persuaded them to allow this behaviour and it means that the vehicle may be able to safely get to the end of the journey without stranding its occupants.