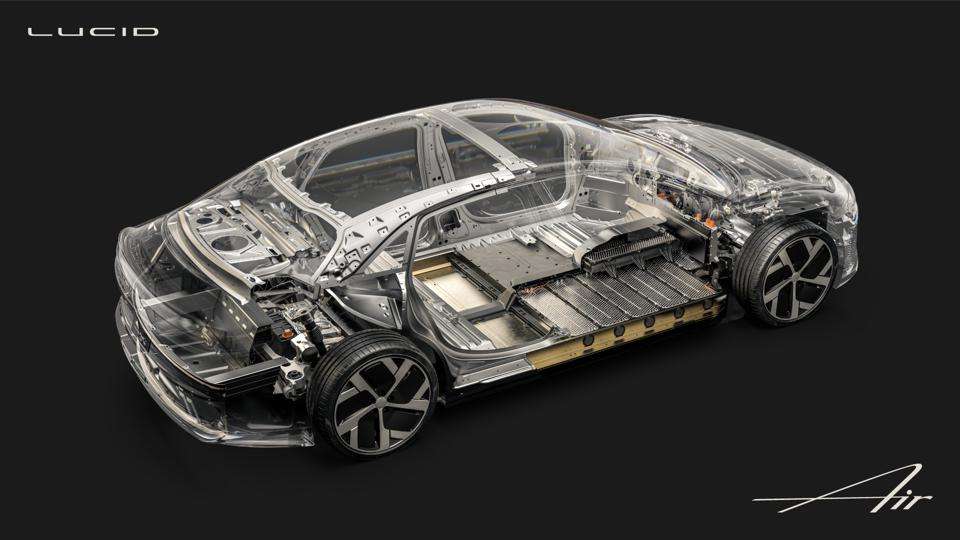 The Lucid Air has been designed to take on the best that Tesla can offer. Atieva (Lucid Motors technology company) designed and made the 2019-2021 Formula E packs. They have used that experience and knowledge to improve the road cars.

With the longest driving range of any electric vehicle on the market, an EPA estimated 520 miles, and over 1,100 horsepower available, the Lucid Air is a technological tour de force

An overview of the battery pack design presented by the CEO Peter Rawlinson. Also, a good introduction to the basics: Series, Parallel, Resistance, Cooling, I2R

Not enough data to fully breakdown the battery packs, but from this and a few other sources we can look at the basic design.

220s30p pack and Dream 118kWh, GT = 112kWh and mention that these use same design of pack, but different chemistry. Could this be the difference between the chemistry used in the Samsung 50G and 48X?

These are very large usable SoC windows. However, it appears in the press [1] that the usable and total energy of the Dream is 118kWh.

The module design is based on the Formula E 2019-21 battery pack design of Atieva (old name used by Lucid Motors for their technology).

Note: the Formula E module used the 18650 size cell and the Lucid Air uses a 21700 size cell. The busbars appear to share the same bill of design.

The busbars very neatly interlace, connecting the negatives on one group of parallel cells to the positives on the next parallel group of cells.

The busbars are aluminium and can be quite slim as they are only carrying 1/5 of the total current.

Aluminium ribbons are then welded to the busbar and down to the cell.

This simple approach to putting the busbars on one end of the 21700 cell frees up the other end of the cell for cooling. Here it is shown and explain in some more detail.

The modules are fixed down each side to beams that run across the battery pack. Also, note that there is a second tier of modules. Two modules at the rear of the pack under the rear seat and one in the tunnel area underneath what would be the gearshift in an ICE car.

There will be a gap between the bottom of the module and the baseplate of the pack to allow the cells to vent. Note the vent discs arrange down each side.

The baseplate is described as an 8mm thick composite material that also works as an aerodynamic underside for the vehicle.