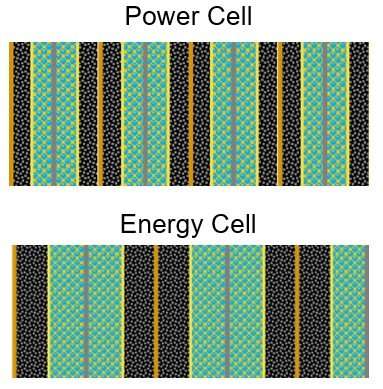 In reference 1 a teardown of a number of cells was done to understand the design versus the characteristic power to energy ratio. This gave the following table of design parameters:

Thin separators benefit the design of both energy and power density cells as it reduces volume and resistance between the active layers.

The electrical tag configuration, thickness and number has an impact on both electrical and thermal conductivity. Pouch cells that are made up of multiple individual layers of electrodes with the positive and negative connections at opposite ends will have the lowest internal resistance. Cylindrical and wound prismatic cells will have less electrical tags per unit length/area of electrode and hence higher resistance.

In simple terms the energy cell has thicker layers of active material, thinner current collectors and less of them.

This means the energy cell will have a higher electrical internal resistance meaning it will generate more heat based on I2R heating.

The energy cell will have poorer thermal conductivity in-plane and through-plane. Thus, it will need a higher temperature gradient to reject the heat.

A comparison of electrode thickness studied from test and modelling [Ref 2] gave the following fundamental results as a comparison:

Another way to increase energy density is with 3D electrodes. Increasing the surface area and connection to the active materials can improve a number of features of the cell.