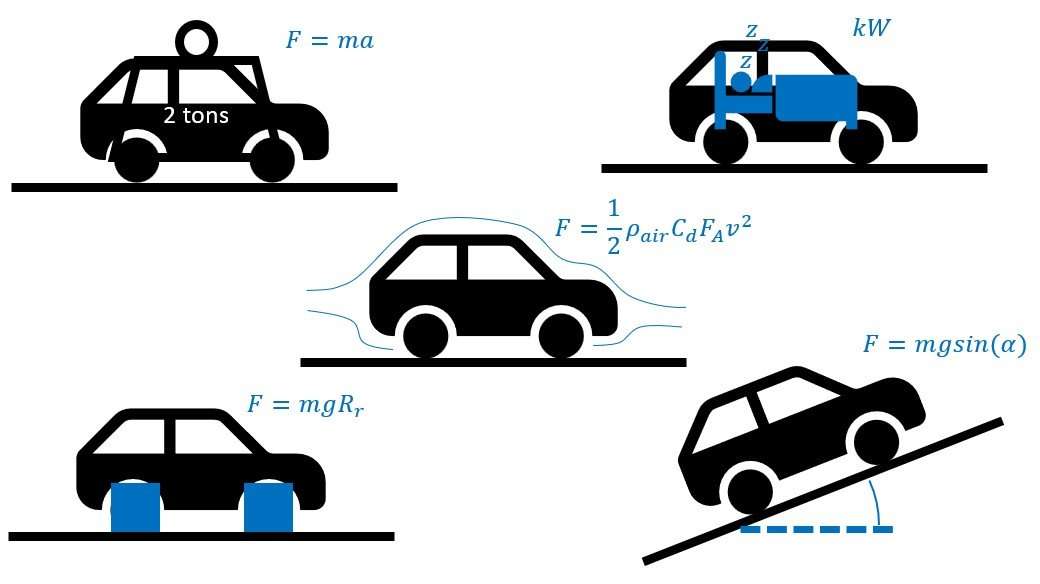 Let’s look at the road vehicle power demand for the simple steady state condition. We will look at the tractive effort and power required:

The aerodynamic forces on the vehicle are proportional to velocity squared and hence become dominant at high speed. FA is the frontal area and Cd is the drag coefficient. ρair is the density of air and we assume 1.225kg m-3

If we accelerate the car very quickly we need to apply a force to do so.

Drive the vehicle up a slope and the additional force is dependent on the mass, gravity and the angle of the slope.

The 5% grade at 65mph (105km/h), at GVW, assuming a tyre rolling resistance coefficient of 0.0044, a motor+inverter efficiency of 94% (assuming this peak has been set for the highway cruise) and a gearbox efficiency of 0.97 give a requirement of 698kW of electrical power.

This post has been built based on the sponsorship of: h.e.l group and LiTech Power

These are all of the loads on the car such as: 12V electrical system load and HV loads such as air conditioning or heating.

The preset values are those for the estimation of the Tesla Semi. Change the gradient to 0% and you will see the energy use at 105km/h on the flat calculated as just below 1.1kWh/km.