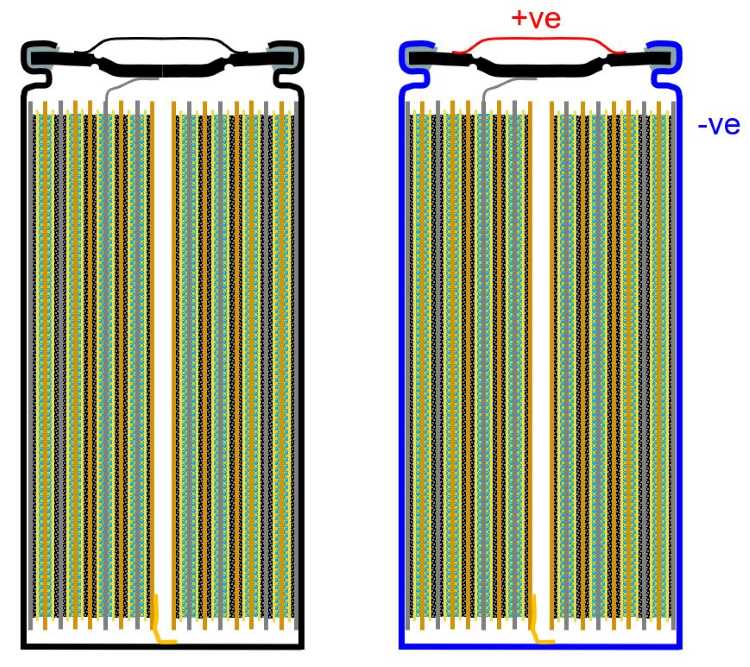 The Lucid Air battery design has single side 21700 busbars. This means the positive (+ve) and negative (-ve) connections to the cells are made on one end of the cell.

The busbars very neatly interlace, connecting the negatives on one group of parallel cells to the positives on the next parallel group of cells.

The busbars are aluminium and can be quite slim as they are only carrying 1/5 of the total current.

Aluminium ribbons are then welded to the busbar and down to the cell.

So, let’s look at how this design approach works in a bit more detail.

If we look at the section through the cylindrical cell we see that the main can of the cell is the negative electrode.

This can gets crimped onto the top-cap with a gasket that isolates, seals and forms the +ve end of the cell.

This means if we that both the positive and negative connections to the cell can be made at one end of the cell.

Looking down on the top of the cell in a simple schematic we can see the central positive and the swaged top edge that is the negative.

We also see a hint of the gasket that seals and isolates the +ve from the -ve. This gasket is sensitive to heat and damage.

The can material for this swaged section is anywhere between 0.2mm and 0.3mm thick (depending on manufacturer).

The thinness of the material on this shoulder and the delicate nature of the gasket make welding a negative connection quite difficult.

The benefit to this approach is that the sides and base of the can are free for cooling. In the case of the Lucid Air battery this allows all of the cells to be cooled with simple large coolant plates bonded to the base of the cells.

The next step is to think about the busbars for this single sided approach. The image shows a 2p2s set of cells. The “tuning fork” busbar is very simple and can be used again and again for each set of cells in the series string.

It is quite easy to see how this idea can be extended to include more cells in the parallel group. In the case of the Lucid Air it has 30 cells in parallel (compared to the 4p shown in this example).

Our benchmarking of Lucid Air, Tesla Model Y 4680 and the Rivian R1T shows they all use single sided busbars to connect the cells in parallel and series.

This arrangement allows all of the electrical connection to be made on one end of the cell and the coolant to be connected to the flat bottom of the cell.

Just looking at the single centre busbar you can see that this needs to be isolated from the cells and just connected using the ribbon tabs. A plastic carrier that locates and supports the busbar and isolates it from the cells could be constructed as part of the overall module structure.

The single side 21700 busbar is used in the Lucid Air battery design and in the Tesla Model 3. This approach can simplify the busbar design and give more freedom to how the cells are cooled.

These values though have a large range: