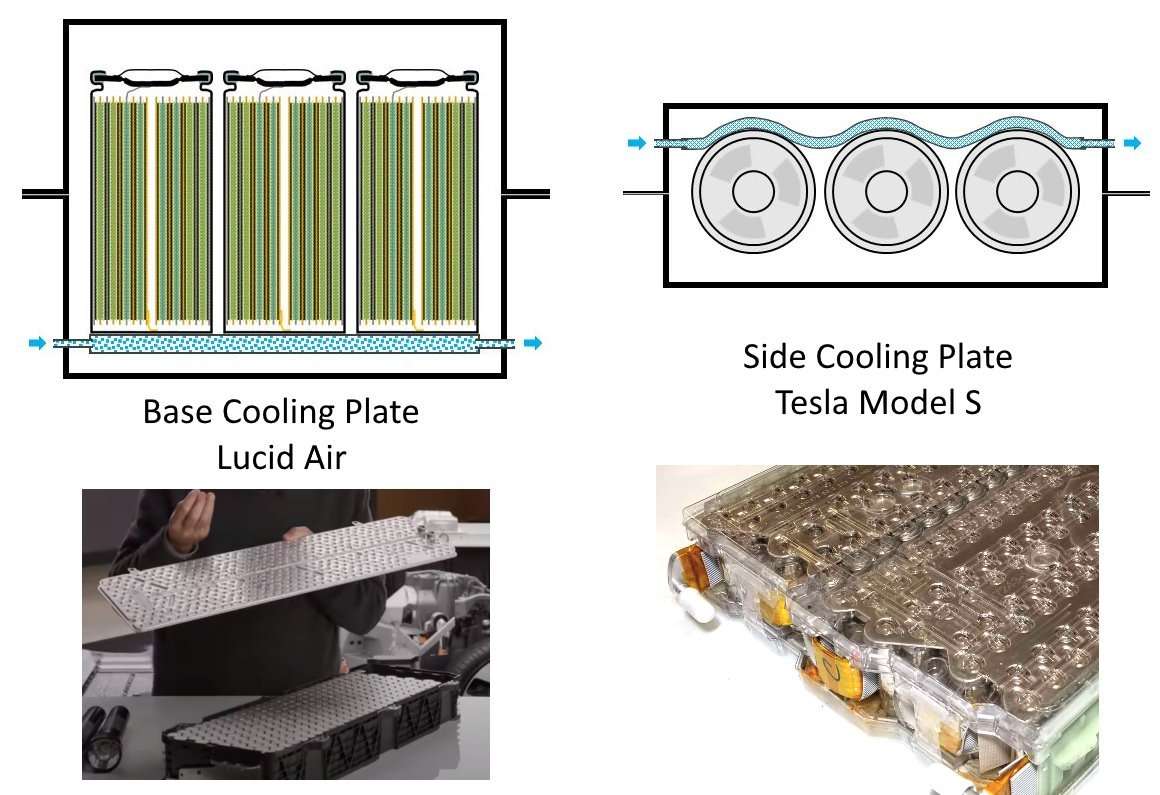 Whatever way we cool a battery cell we will create temperature gradients in the cell.

Let’s start with the basics and look at thermal conduction.

We have a material of length, d and cross-sectional area, A that is hot, T2 at one end and cold, T1 at the other end. Knowing the thermal conductivity, k of the material we can calculate the heat, Q.

As a very rough first order calculation let’s take the cylindrical cell and assume it is the thermally conducting rod.

End cooling of the cell as per the Lucid Air.

The maximum working temperature difference end to end is normally specified by the cell manufacturer as 2°C.

A 2°C temperature gradient would be generated with a heat flux of 0.11W. If the cell has an internal resistance of 0.025Ω then a current of 2.14A would generate a joule heating value of 0.11W, this is a discharge rate of less than 0.5C, this cell is not being pushed hard.

This temperature difference might be allowed to increase to 5°C or even 10°C for short transient events.

We could increase the area of contact between the coolant and the cell, this would give a greater heat flux for a given temperature delta.

Note: I’ve tried to align the assumptions on this calculation with the bottom cooled cell and used the same equations. This means I have assumed a contact area of 18mm x 60mm and assumed this is a rectangular block of active material. Perhaps some big assumptions, but this is a rough estimate. A 2°C temperature gradient would be generated with a heat flux of 0.09W and shows that these two methods are roughly comparable.

This is very approximate as the joule heating is distributed throughout the cell, however, this gives a feel as to the steady state conditions under which a temperature gradient can be generated.

If you have run full 3D thermal calculations on cell cooling systems that you can share online then do please drop us a line.

There are a number of battery cooling options and all of them create this temperature gradient to a greater or lesser extent.

The dielectric cooling system immerses the cells in the fluid, thus maximising the surface contact area and giving the highest possible heat flux. However, this comes at the expense of weight and complexity.

Heat generation in a cell can be defined quite simply for the case where the cell is operating within it’s normal limits. The first expression gives the heat flow [W].

The first part of this equation is the irreversible Joule heating term, the I2R term.

The second part is the reversible entropy term or Reaction heat terms. The charge and discharge reaction can be exothermic or endothermic under certain conditions.

This changes depending on whether you are looking in plane or through plane. In-plane the conductivity will be dominated by the metallic electrodes and is approximately 10x to 100x greater than the through plane conductivity.