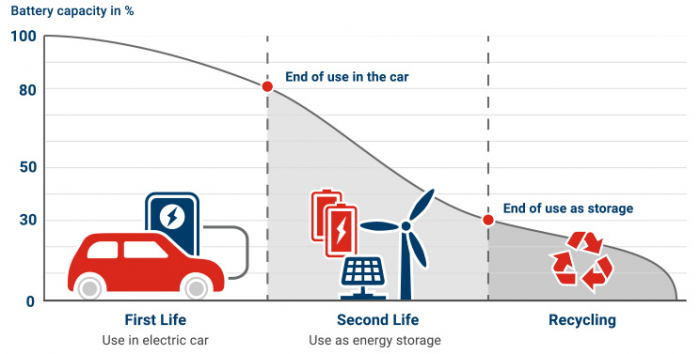 What is Second Life of Batteries? Electric Vehicles (EV) Batteries have or will have a lifecycle of 10-15 years in Electric Vehicles. It may vary depending on the manufacturer and type of the Battery. As per the guidelines of Original Equipment Manufacturer(OEM), electric vehicle batteries should be replaced if they reach at their 70-80% usage capacity. However, these batteries have sufficient life left in them to run for other applications even at this stage.

The Global demand for batteries is expected to rise 14-fold by 2030 (World Economic Forum). By this time, in Europe around 965 GWh of annual battery production capacity is expected online, accounting for 28% of 2030’s announced global capacity of around 3,500 GWh and increasing 20-fold from 2020 (McKinsey).

The Boom in batteries is largely a consequence of the adoption of electric vehicles – European battery EV sales more than doubled in 2020 to close to 750,000 and pushed beyond 1 million through 2021 for a market share of 10.3% (Schmidt Automotive).).

According to market tracker SNE Research, the EV battery recycling market is forecast to grow from $300 Million (2020) to $74 Billion (2040). Source

So, what are the options for batteries after they reach their End of Life in Electric Vehicles?

Renew: First Option is to renew the batteries at OEM by replacing it’s components and using it again in a New EV. (After Testing confirms the suitability).

Reuse: Second Option is to re-use these batteries for secondary storage applications such as EV charging, connect to renewable energy sources such as solar and wind energy.

Recycle: Third option is to recycle the battery and recover short supply of valuable materials (Lithium, Nickel, Copper, and Cobalt) and reuse them to remanufacture batteries.

Remanufacture: Fourth Option is to remanufacture the batteries for aftermarket use in EV. (After Testing confirms the suitability).

Source for all 3 images above- Recycle, Reuse, Remanufacture (Originally also happens to be my source of inspiration to write this article.)

A second life for electric car batteries: The German–Indian start-up Nunam is bringing three electric rickshaws to the roads of India. They are powered by used batteries taken from test vehicles in the Audi e-tron test fleet. Source: official Audi Article

Connected Energy, a specialist in award-winning energy storage solutions that give a second life to electric vehicle batteries, has commissioned its largest ever second-life battery energy storage system, the E-STOR. Using Renault batteries, these systems are a fundamental part of harnessing the circular economy to provide industrial-scale energy storage. Source: Official Renault article

SK Innovation will build its first Battery Metal Recycling plant by early next year with an aim to put it into commercial operation by 2025. The company said it also plans to build a BMR plant overseas to recycle scrapped batteries.

LG Energy Solution, Korea’s top battery maker, will set up a value chain in the EV battery business from mining raw materials to production and disposal of batteries. LG Energy, which formed Ultium Cells LLC, an EV battery joint venture with General Motors Co., has signed a business contract with a US battery recycling company to enter the American battery disposal market.

Samsung SDI, a unit of Korea’s top conglomerate Samsung, has partnered with PMGROW Corp., a Korean electric bus and battery product maker, to advance into the battery recycling market.

Northvolt: They manufacture Green Batteries (less CO2 footprint by using sustainable manufacturing via green electricity and recycling). Northvolt plans after end of Life to completely recycle batteries and reuse the material up to 95%. They produce proprietary lingonberry NMC chemistry batteries. In Dec 2019, through ReVolt inhouse program for recycling was developed (Northvolt) and hydrometallurgy for batteries was refined. Their Target is to source 50% of the raw materials for batteries from recycling by 2030.

2: Revolt ETT recycling plant is being constructed alongside Northvolt ETT Gigafactory. Fully built, Revolt ETT will recycle around 125,000 tons of battery materials per year. This will include production scrap from its neighbouring facility as well. Source for all above for Northvolt